In the end of November, 2013 Softwerke started a pilot German language course from the very beginning (basic level). 9 people began to learn German informal (colloquial) language with elements of business and IT terminology. The whole course lasted 83 hours; the group had 1-hour-lessons 3 times a week.

In the middle of May our pilot German language course ended very successfully. The results were above the average level which was seen during the long-term practice of an experienced teacher Natalia Bulgakova.

The group finished the first stage of studying and passed the test for the level A1 (it was enough to have 60 points to pass the test, possible maximum is 100 points) with the following results:

Thanks to such perfect results the project is going to be continued after a summer pause in September 2014. Our realistic and pleasant aim is the next stage of language knowledge on the level A2. We congratulate our colleagues who took part in this project and showed strength of will at lessons and in consistent working on all language skills 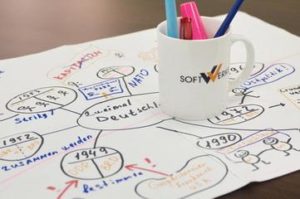